LUCY IN THE SKY WITH DIAMONDS 🧪 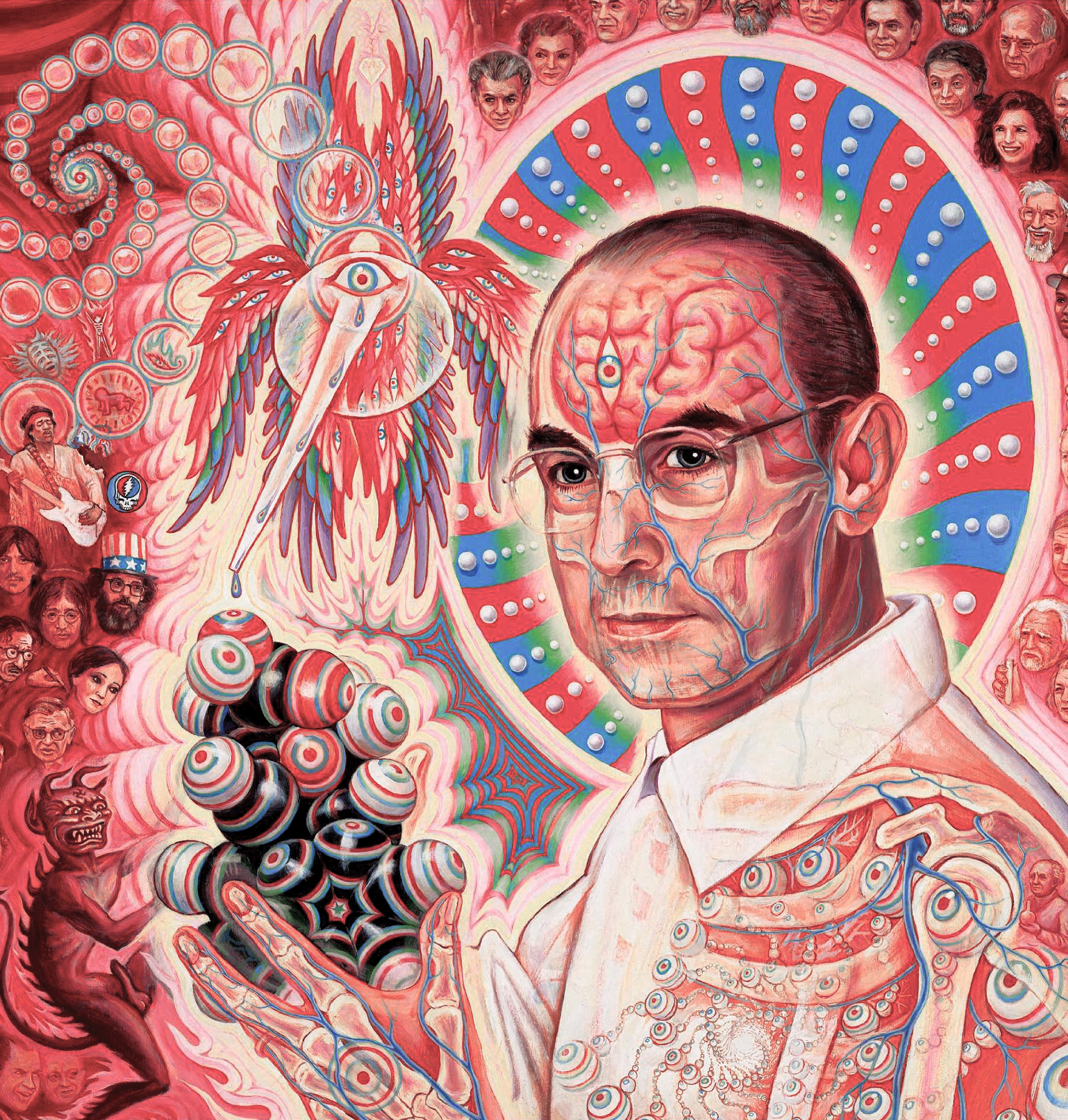 The chemical structure of LSD is very similar to that of serotonin, and it is generally assumed that the LSD experience is caused by it interacting in some way with this neurochemical system. The exact way that this takes place is still disputed (as demonstrated by Steve Finney, who provides an excellent overview of the state of pharmacological research into LSD).

Tolerance to LSD develops very quickly in humans, so much so that it has been called an 'anti-addictive' drug. After taking LSD, an identical dose taken a few days later is likely to produce little or no effect. Increasing the dose may generate a psychedelic experience, but something of the 'freshness' of the trip is dulled. Individual tolerance varies. Some users are happy, leaving seven days between trips in order for each dose to have a full effect. Others (myself included) prefer to leave at least 30 days. In this respect, the blurred line between psychological and pharmacological is again apparent. Although one might have, chemically, returned to zero physiological tolerance after a trip, one might not have returned to zero psychological tolerance. The longer the gap between trips, the more powerful each one is likely to be, as the individual has more time to withdraw from the drug experience (making the 'shamanic return') and build it into an everyday rational framework.

The speed at which LSD works can also vary dramatically. Generally, between 30 minutes and 1 hour is thought to be the average time before the drug's first sensations are felt if it is taken orally. (However, as mentioned above, I have experienced 'coming up' on a trip within 15 minutes.)

A friend, who is an astrologer, told me some years ago that he felt that LSD should be described as being under the rulership of Pluto. Pluto in astrology, as in classical myth, is the ruler of the underworld, the realm of the unconscious mind.

Moreover, the symbol of Pluto stands for the explosive moment of transgression, the extreme cusp of death and re-birth. The images called to mind are of the moment when the sperm penetrates the ovum and explodes its genetic information into the egg cell, or the fusion reaction which begins a star's ignition. For me, LSD is certainly a Plutonian drug – in terms of pure quantity it is one of the most powerful drugs known and its essential psychedelic effect is 'solve et coagula', to break the world up, to smash it into fragments of visual distortion and strange meaning. And then, to recombine it. To merge previously irreconcilable elements of the world together, to make one see the infinite in the finite, to sense that one is part of a great cosmic whole. The fact that, microgram for microgram, LSD is the most potent psychedelic, reiterates this 'atomic' symbolism of astrology. Just a tiny amount of LSD can rip your universe apart with awesome consequences. It can fuse experience in a mystical oneness and, perhaps most important, it can generate both of these experiences simultaneously.

LSD can be its own ritual. Each LSD experience has the definite character of a journey, a 'trip', a ritual, an adventure. As many LSD users will wryly tell you, one of the oddest effects of LSD is that weird things often happen on it. It is common for someone talking about their LSD experiences to say something along the lines of 'sure, I know I was on acid, but I'm sure that such-and-such really happened.' The weird event in question can vary from the urbane (such as going into a pub and seeing a group of drinkers who, for some reason, are dressed as clowns), through to the thoroughly mysterious (seeing UFOs, being capable of superhuman feats and so on). The 'reality' or 'intra-subjectivity' of these events is of less importance than the very fact that they are reported. LSD shakes up the boundaries of the world so much that categories like real/imaginary, true/false become destabilized.

Historically LSD demonstrates how drug lore can be just as important in shaping drug experience as any chemical concoction in itself. Until the 1960s, the LSD experience was pretty much considered one phenomenon. Although trips could include 'easy' or 'difficult', and contain different points of focus, acid was essentially thought of as a variable but specific type of drug experience.

This situation changed as a result of two interactive factors. The first was the concerted campaign on the part of a number of discourses (most obvious in their manifestation as 'the media') to spread scare stories about the drug. As Bruce Eisner writes "Expectations about the LSD experience strongly influence the nature of the experience…Prior to 1962, there were very few negative experiences reported by those who experienced LSD." A feedback loop was set up in drug culture. In trying to understand stories about widely differing experiences due to the action of the one drug (ranging from the old chestnut of crazed college youths jumping out of fifth story windows, to the idea that LSD could cause genetic damage), people sought the answer in the chemical composition of the drug. When the underground chemist Owsley was synthesizing

LSD in the United States, he decided to color-code different batches. Although chemically the dye was inert the different colors of acid quickly developed different reputations. Red acid was said to be more intense, green-colored acid more mellow, purple more spiritual, and so on.

LSD is such a powerful drug, active at doses as low as 50 micrograms. Therefore having gone to the bother of making the clandestine chemical, it is hardly necessary to adulterate it. As Bruce Eisner, writing in High Times in 1977 observed "… there is rarely speed or strychnine in street acid. The most common additive is PCP (phencyclidine, or Serylan, an animal tranquilizer that causes hallucinogenic delirium reactions), which is also present when street acid is mislabelled 'mescaline' or 'psilocybin.' 217 Although there certainly are impurities in street acid today the major variable in the effect of the trip (from a chemical perspective) is the dose. Since, as Hofmann himself has pointed out LSD is highly susceptible to chemical degradation by light and oxidizing agents. LSD is liquid at room temperature (hence the wise precaution of keeping it in the refrigerator) and so a blotter (the most common packaging for street LSD) will lose its potency over time depending on the conditions in which it is kept.

The LSD molecule itself comes in the form of four basic variations, only one of which is the powerful psychedelic that people generally mean when they talk about LSD. The other forms of LSD may be present as impurities but are likely simply to reduce the effectiveness of their active counterpart.

In short, although acid may have been 'better in the old days' (assuming your old days were during the period of LSD's legality) impurities are an inevitable but fairly inconsequential part of the street acid experience. The variation of acid experience is far more likely to be influenced by set and setting and dosage than it is by whether the acid is 'clean' or not. Considering its powerful destruction of the boundaries between Self and Other, LSD is remarkable as Albert Hofmann recognizes in LSD My Problem Child:

"What seemed even more significant [than the extremely low dose at which LSD is active] was that I could remember the experience of LSD inebriation in every detail. This could only mean that the conscious recording function was not interrupted, even in the climax of the LSD experience, despite the profound breakdown of the normal world view. For the entire duration of the experiment, I had even been aware of participating in an experiment, but despite this recognition of my condition, I could not, with every exertion of my will, shake off the LSD world. Everything was experienced as completely real, as alarming reality; alarming, because the picture of the other, familiar everyday reality was still fully preserved in the memory for comparison".

Because the experience of LSD does not generally include the loss of memory (which is a common feature in drug experiences reached with solanaceous plants such as nightshade) it can be directly linked back to the world. This is especially true if the shamanic return is managed well. For this reason, LSD (in common with psychedelics such as mescaline and psilocybin) has powerful potential as an aid to psychotherapy. Indeed studies before and after the prohibition of LSD have shown that, in the hands of an experienced and sensitive therapist (or shaman, or magician) acid can be a great aid to mental healing. The experience of 'peaking' on acid can put you utterly in the realm of 'madness', yet the experience can still be apprehended and, in some sense, remembered. A peak moment of acid happens outside of language, it is something which we can remember afterward but is itself virtually inexpressible. Of course, this does not only go for acid but for most types of numinous experience. One of the advantages of acid is that it puts the body under little stress in getting to the numinous peak (unlike, say fasting), however, the very fact of this means that it may be a difficult experience for someone who comes to it without prior training in altered states of consciousness. Naturally, most people who enjoy acid, even if they have never explored meditation, ritual or other spiritual practices, can cope admirably with it. We should not assume that 'training in altered states' should come from an external teacher. After all who was it that initiated the first shaman and gave her the first magical brew to drink?

Perhaps because of its astrologically Plutonian nature (or perhaps for historical reasons as a 'swinging sixties' drug), LSD has a great affinity with that other powerful boundary dissolving experience, sex. Although some people report ecstatic sexuality on LSD, most users find that they are somewhat less liable to sexual arousal simply because the drug experience itself is so powerful. Any additional stimulus is hard to focus on and sequential acts become fragmented and fail to hold one's attention in the usual way. Many people, however, in my experience find that they feel an increase in sexual arousal after the trip has ended. In part, this might be thought of as both a fitting means for expressing the insights of LSD as well as a method of 'grounding' the Self in the physical soma.

There are accounts of women conceiving on LSD and there is perhaps some evidence that LSD might well stimulate ovulation (even at quite unlikely points in an individual's menstrual cycle). It is also quite common for people to want to wash, often to bath, after acid. Again in part, this may be a simple relaxing, 'grounding' practice. It may also be thought of as a kind of re-baptism into the world and made into a conscious part of the ritual of transgression. For some people, the desire to bath is because acid leaves them feeling physically dirty. In part this may be due to the strange but subtle tactile hallucinations that LSD creates, sometimes making surfaces (including one's own skin) feeling dusty or greasy.

During the 1950s, a researcher gave an artist two 50-microgram doses of LSD (each dose separated by about an hour), and then the artist was encouraged to draw pictures of the doctor who administered the drugs. Nine portraits were drawn over the space of eight hours. We still don't know the identity of the artist. But it's surmised that the researcher was Oscar Janiger, a University of California-Irvine psychiatrist known for his work on LSD. During the experiment, the artist explained how he felt as he worked on each sketch. You can watch how things unfolded below.